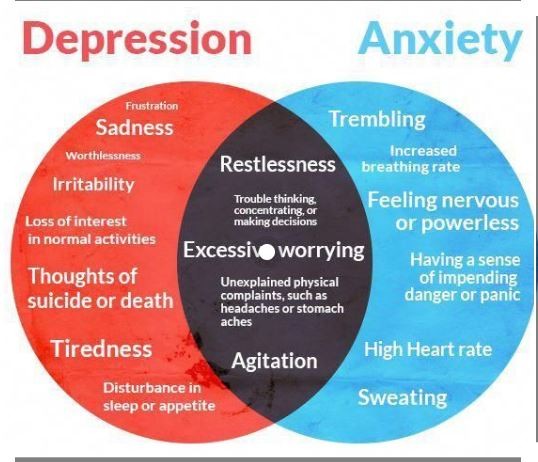 HERE ARE 7 COMMON LIFESTYLE CAUSES OF DEPRESSION AND ANXIETY:

People abuse substances such as recreational drugs and alcohol for a number of reasons. Substance abuse is a habit that may form at any time, including childhood and teenage years.

Individuals susceptible to depression and anxiety who engage in drug use are more likely to develop mental illness.

Becoming exhausted because of too much of a heavy workload causes stress reactions within the body. Most people today concede that they’re at least moderately impacted by stress caused from work.

A common talking point in the news is the prevalence of Post-Traumatic Stress Disorder (PTSD) in military members. Being a witness or victim of violence of any kind can trigger a biological reaction that evolves into full-blown anxiety and depression.

Feelings of grief following the death of a loved one or friend, though uncomfortable, can serve as a good healer. However, prolonged grief in susceptible demographics can cause mental health issues.

People diagnosed with untreatable health conditions may be at an increased risk of becoming depressed. Age-related illnesses or diagnoses of terminable condition such as Parkinson’s Disease, Alzheimer’s, cardiovascular disease, or cancer often induce feelings of panic and helplessness; of course, prolonged exposure to these feelings can manifest into anxiety and depression.

It is also worth mentioning that the changes of an anxiety/depression diagnosis increases with age, per WebMD.

During the infamous Wall Street Crash of 1929, which led to the loss of billions of dollars and laid the foundation for the Great Depression, 23,000 people committed suicide – at the time, the highest number of suicides ever in one year.

While the number of people who killed themselves due to anxiety and depression cannot be ascertained; it is fair to assume that the mental illness had played a role.

Finding accurate statistics and facts people with low self-image (self-esteem) is quite difficult. Across sources, a few common outliers:

– Females are more likely than males to have self-esteem issues

– There is a correlation between negative self-image and suicide

A continually negative picture of oneself can lead to obsessive thought patterns; about appearance, money, reputation, and so on. In a worst case scenario, the brain’s neurochemistry is altered, producing depressive and anxious symptoms or conditions.

As human beings are naturally social creatures, we require social interaction to function properly. Human beings also long for intimacy; another person to care for, love, and support them.

Isolation, voluntary or involuntary separation from other human beings; and rejection, refusal of others to accept or consider you as part of something, are counterintuitive to the brain’s innate social cognitive functions. As a result, the brain adopts opposing thought processes, and forms neural networks, that disturb it’s natural chemistry.

In short, isolation and/or rejection can lead to a neurochemical imbalance that manifests into anxiety and depression.

Should you or someone you know potentially suffer from an anxiety or depression-related illness, there are a variety of effective treatment options available.

Therapists, support groups, medical professionals, and many others are there to help resolve the issue.

In other words, you are not alone. Don’t be afraid to get help!

As a Licensed Clinical Social Worker, I have been working with individuals, couples and families for over twenty years. My goal is to help you enhance your life, improve your overall functioning and have a better understanding on how to care for yourself.